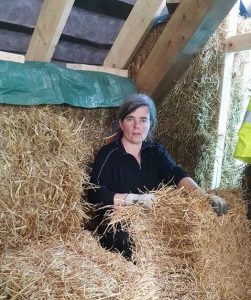 What led you to Natural Building Amanda?

Well, I started off studying to be a vet but found it wasn’t the right sector for me when I realised that farm animals were regarded as money makers. A vet’s job therefore was to make sure the animal was healthy not for its own sake but for profit.

From there I went on to do a BSc in Zoology and did some wildlife rescue work which led me to environmental conservation with (B)TCV and urban ranger work with a social enterprise.

An Urban Ranger sounds like an exciting job.  What did it involve?

A lot of the usual environmental stuff: tree planting, grass cutting, fencing etc. but also a lot of community involvement in helping to improve green spaces and particularly some work with a heavy horse. I used the horse (a Clydesdale) to pull a plough, cut grass and extract timber from woodlands. The children loved him and it was a great way for me to bring my veterinary and conservation skills together. However, this job came to an end when I was made redundant, so I went off to be a dry stone waller and gained some qualifications there.

Of course you did! What happened next?

I turned 40! When I was 16 I’d been with a boyfriend to the Centre for Alternative Technology and there I’d seen among other things, a composting toilet and I wanted one. So, when I got to 40 and I still hadn’t got one I decided that the time had come to do something about it. I volunteered on a timber framed roundhouse at Lammas and I did some taster natural building sessions at Hill Holt Wood. I then remembered Barbara’s name and googled her! It was then that I discovered SNaB.

Around last March/April. I first went on a course at Boggart Hall, which was great. Since then I’ve completed all my strawbale building modules and volunteering.  I’ve done the lime plastering modules and have attended all 4 of the theoretical modules twice. I’ve found the combination of practical and theory to be really useful. I’ve also done some volunteering recently on shingling on the CVP project. I’ve got car tyres and clay plastering left to do.

When you’re finished the programme what do you intend to do?

I’d like to buy a piece of land, probably abroad, where it’s a bit cheaper and build a strawbale house. Then I’d let it out, knowing that it was a good place for people to be and I’d have an income from the let.

So you wouldn’t live there yourself?

No, not initially because I have another plan. When I was dry stone walling I hurt my upper back and neck badly. I went to a physio who helped the injury but who also explained that injuries are mental problems as well as physical. In that the mind remembers an injury even when the physical problem has cleared up. To attend to this, the physio recommended hair brushing and stroking my own arm and shoulder to reassure my brain that my body was being treated gently again. This led on to talking therapy with a Taoist monk. I’m currently working with him and, in the future, intend to offer the same sort of therapy myself to others who are suffering from depression (and other mental health problems) or who are looking to work to their strengths. The crux of the philosophy is wu wei – effortless effort.

It sounds amazing, what a great objective to have. However, where does that leave you with your quest for a compost toilet?

Well, obviously I’ll have integrated that into my strawbale house!

It sounds like your house will be a great place to be. Let us know when you find the land as there may be other SNaBbers looking for an opportunity to volunteer.

The UP Straw Yearbook is now out and you can download your free copy here. Chris Magwood describes it as “an inspiring and excellent document!”
Take a Virtual Tour of a selection of straw bale buildings we’ve designed & built with our sister company Straw Works. Click here for the tour.